Alameda County Jane Doe was a teenager or young adult who was found murdered in a hotel room in Oakland, California.

Alameda County Jane Doe was found deceased in a hotel in 1969. She had presumably been killed by Taylor Teaford, whom she had entered a hotel room with.

The condition of the body has been disputed, as some sources state she was in a recognizable state, where others claim she had been subjected to traumatic injuries. A postmortem photograph on her NamUs page indicates she was, indeed, recognizable.

Teaford is still at large. It is speculated that she may have been a prostitute. 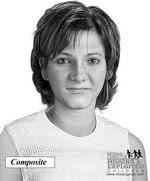