"Baby Doe" was an infant boy found deceased in a garbage bag near Boulevard Lake in Thunder Bay, Ontario on March 4, 1994.

On March 9, 1994, police were called by a group of teenage girls who had discovered a black garbage bag that contained the body of the baby boy five days earlier on the east side of Boulevard Lake.

The teenagers initially thought the garbage bag contained animal remains, until curiosity led one of the teens to look inside and discover the body. Some articles of clothing were found inside along with the body.

The infant boy was born alive and healthy, just hours or days prior to his death, leading to the case being investigated as a murder.

Funeral services for the infant boy were later held, drawing a large crowd and was buried in Riverside Cemetery.

On April 18, 2019, investigators with the Criminal Investigations Branch of the Thunder Bay Police Service sought the services of Parabon NanoLabs, Using DNA collected from some of the articles of the clothing recovered, Snapshot produced trait predictions for the associated person of interest – the mother of Baby Doe.

On May 30, 2019, police publicly released a snapshot DNA-predicted image of the mother of Baby Doe. A news conference was also held that same day to reveal the image and urged possible witnesses to come forward. 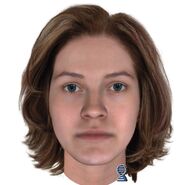 DNA-predicted image of Baby Doe’s mother at the age of 25.

Retrieved from "https://unidentified.wikia.org/wiki/Baby_Doe_(March_1994)?oldid=116532"
Community content is available under CC-BY-SA unless otherwise noted.