"Baby Eve" was an infant discovered in a dumpster in Calgary, Alberta on Christmas Eve in 2017. In January 2020, with assistance from the American-based company Parabon, the newborn's mother was identified through DNA as Nina Albright.

The infant's body was located in a dumpster in a parking lot at 11:30 PM. Police initially believed she had been at the scene between between a half hour and 7.5 hours. It was unclear how the baby, later known as "Baby Eve" had died, as no injuries were apparent. There was a possibility that she had been born alive and died from exposure. Police were initially unsuccessful with obtaining information after canvassing the area, and they did question whether the mother was local to the area. Nearly 100 tips were submitted but did not yield results.

After the body was autopsied, it was determined that Baby Eve was born alive on the day she was discovered and had no breathing abnormalities. The manner of death was undetermined, so investigators declined to label the infant's mother beyond being a person of interest. At this point of their investigation, there was no evidence that she had specifically disposed of the body. It could not be verified whether Baby Eve was "abandoned alive."

In February 2018, the Parabon Nanolabs released results of phenotype testing on the mother of Baby Eve, which were submitted in hopes to resolve the case. The phenotype results suggested Baby Eve's mother was of European and Indigenous descent, with a light complexion, green or hazel eyes, few freckles, and dark hair. An accompanying composite image was developed, depicting Albright at ages of 18, 25, and 35.

DNA identified Baby Eve's mother as Nina Albright, who was 21 at the time of her arrest. Security footage also provided sufficient evidence to support this finding. Albright was observed, with a male she was believed to have been dating, around the time the infant was born buying unspecified items associated with post-delivery care. The father of the baby had not been identified at the time of Albright's arrest in late January 2020.

Subsequently, she was charged for the unlawful disposal of a body, as well as failure to provide proper medical attention to her newborn daughter. 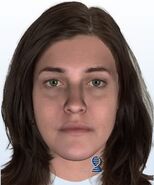 Albright depicted at age 35.
Add a photo to this gallery

Retrieved from "https://unidentified.wikia.org/wiki/Baby_Eve?oldid=134573"
Community content is available under CC-BY-SA unless otherwise noted.