Not to be confused with the Bag Lady.

"Betty the Bag Lady" is the nickname given to a woman found dead alongside a road in 1992. She had been placed at the location days after her death.

She is currently undergoing testing by the DNA Doe Project. Recent testing indicates she has relatives in Ireland.

The victim's body was found on August 23, 1992 on Krueger Road, Berrien County, Michigan. The body was nude and had been bound with twine and wrapped with various materials such as a sheet, a towel and two garbage bags. Her hands and dentures were missing.

Investigators have hypothesized that she may have lived at a care facility in one of the neighboring states, specifically either northern Illinois or Indiana.

It was announced in August 2020 that investigators were following potential leads in the case, of which the investigating office said may be potential family members.

The DNA Doe Project believes that the decedent could have connections to these surnames and locations: 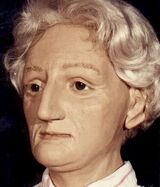 Retrieved from "https://unidentified.wikia.org/wiki/Betty_the_Bag_Lady?oldid=169914"
Community content is available under CC-BY-SA unless otherwise noted.