Carson Jane Doe was a young woman found dead in Carson, California in 1978.

The female was uncovered from a shallow grave after she had been buried in a field.

A 1970 dark blue Vega Hatchback vehicle was seen in the area at the time of the discovery and was occupied by two Hispanic males.

No clothing has been reported to have been found. 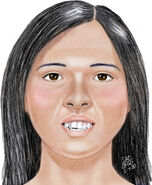 LAPD reconstruction
Add a photo to this gallery

Retrieved from "https://unidentified.wikia.org/wiki/Carson_Jane_Doe_(1978)?oldid=103929"
Community content is available under CC-BY-SA unless otherwise noted.