Unidentified Wiki
Register
Don't have an account?
Sign In
Advertisement
in: Male, Suicide by hanging, Transients,
and 14 more

Charles Ray Jordan Jr. is a man who disappeared from Laurel, Mississippi on January 1, 2003. In September of 2003, he received treatment at a hospital near Barstow, California for eczema on his hands and legs. He provided his name as being "Charles Gordon" and gave his date of birth as June 16, 1959. He was found to have hung himself from a tree near a railroad at a transient camp in Barstow on October 22, 2003, but was not identified until March of 2021, partly because of him using an alias name and date of birth. 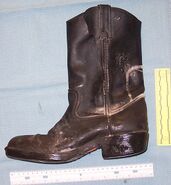 One of the boots found with him at the scene.