Cheryl Pine is a formerly unidentified woman who died in 2004. Eight years later, her skull was found in a wooded area. She was identified through DNA samples from her family.

Cheryl was at David Joseph Ouelette's apartment on the night of June 30, 2004. Both of them were using drugs and Cheryl collapsed in his bathroom. David attempted to revive her at first, but eventually resorted to choking her. He had a friend partially dismember her in his apartment and finished dismembering her in a rural area. This friend has since died. Cheryl was reported missing to the Royal Canadian Mounted Police in August 2004.

David was charged in November 2008 for the manslaughter of Cheryl. He was also charged with the second degree murder of Douglass Edgett, who David shot to death in 1991. He was sentenced to life in prison without the chance of parole for fifteen years in June 2009.

Cheryl's funeral will be held in the spring of 2021 and will be buried alongside her mother, Kathryn Pyne-Welner. Kathryn was 45 years old when she was murdered in 2005 and her murder has yet to be solved. 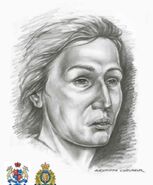