Dana Nicole Lowrey was a female located in Ohio in 2007. She may have used the name "Diane/Diana" and was nicknamed "Vicky" by authorities.

Suspected serial killer Shawn Grate confessed to her murder in 2016. In 2019, she was identified.[1]

In 2016, it was announced that suspected serial killer Shawn Grate claimed to have killed the victim, who was apparently selling magazines door-to-door. He claimed to have abducted and stabbed her to death and dumping her body along the road it was discovered.[2]

Her suspected killer claimed her name started with a "D," possibly as Dana, Diana or Diane.

Isotope testing results showed that the victim may have been born in Mississippi, Louisiana, Alabama, Florida or Georgia, and lived in Florida or Texas for a long period of time.

The DNA Doe Project aided in the victim's identification through genetic genealogy. Lowrey's identity was released on June 4, 2019. She was last heard from in Ohio in May 2006 after calling her estranged husband. Lowrey was the mother of two small children. Lowrey was reported missing in May 2006, although a live stream from the Marion County Sheriff's Department stated her disappearance was unreported.

On September 11, 2019, Grate pleaded guilty to Lowrey's murder. Grate was sentenced to life without parole plus 16 years. 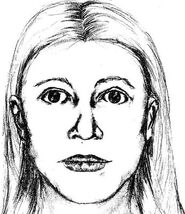