Horace Jack “Dany” Prescott, Jr. was a male whose partial remains were discovered in Washington between January and April of 1978. He was identified in November 2019, nearly a year after his name was discovered on clothing associated with the remains.

A dog initially carried the skull from a field in early 1978. Additional remains were discovered in that location in March and April. Little information is known about the case, as the files were previously destroyed.

Following his exhumation, the name "Prescott Horace" was discovered on the man's shirt, leading to strong speculation that the remains belonged to Horace "Dany" Prescott, 49, who disappeared from Seattle in 1976. In November 2019, both cases were removed from NamUs, and the medical examiner confirmed via Twitter to verify the match.

Homicide is not a factor in his death.

Dany Prescott as a sophomore

Dany Prescott as a junior 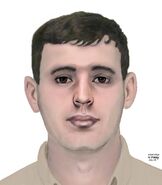 Retrieved from "https://unidentified.wikia.org/wiki/Dany_Prescott?oldid=126610"
Community content is available under CC-BY-SA unless otherwise noted.