Unidentified Wiki
Register
Don't have an account?
Sign In
Advertisement
in: Male, Homicide by beating, Recognizable faces,
and 9 more

While he remained unidentified, he was known by the nickname "El Niño del Contenedor" (English: "The Boy in the Container").

Dhilan's body was found inside a box on a trash container by a garbage picker. He was beaten and his bladder had exploded.

He was identified in 2001 by his grandmother and his step-father's business partner and fellow member of an agnosticism group. Both of them and various neighbors testified that his step-father, Francisco Javier López González, and his mother, Liliana Lucero Mercado González, abused him because of the religious and philosophical beliefs of Francisco, who was a gnosticism teacher, from beatings to inhuman punishments like standing holding two concrete bricks or being washed with cold water at night.

Francisco was identified by a taxi driver, who took him to the trash container where Francisco left the box with Dhilan's body inside on it.

Since Dhilan's murder, both Francisco and Liliana have not been seen again and for a time were searched by the FBI until the FOC retired.

A family photo of Dhilan, Liliana and Francisco 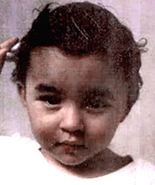