Donna Marie Prudhomme (April 23, 1957 - July 1991), (nee: Gonsoulin) previously nicknamed "Janet Doe" was found in 1991. She was one of the Texas Killing Fields victims. DNA linked her to potential relatives in Louisiana. She was identified in April 2019.

Donna Prudhomme was born in Port Arthur, Texas, in 1957. She moved from Beaumont, Texas, to Austin, Texas in approximately 1986. She then moved to Seabrook, Texas in 1988 and then to Nassau Bay, where she was last heard from in July 1991. She moved around in order to escape an abusive relationship. 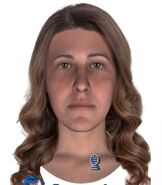 Retrieved from "https://unidentified.wikia.org/wiki/Donna_Prudhomme?oldid=121541"
Community content is available under CC-BY-SA unless otherwise noted.