For the child found in California, see Dora.

"Dora Doe" was a woman found murdered in Oklahoma in 1994.

Dora's body was discovered two miles south of Dora, Arkansas, near the Oklahoma-Arkansas border. No clothing was found at the scene. Her body had been wrapped in landscaping material tied up with twine. Her head was found 15 feet away from the rest of her body. Her heart and left lung were missing. The brush around the body had been cut with a sharp object and laid over the body.

A witnesses told investigators that on October 5, 1994, between 4 and 4:30 pm, they saw a white male dragging an object wrapped in black plastic bag near the area where her body was found. The man is described as having brown hair, a mustache, and is approximately 6 feet tall with a slender build. He was reported to have been driving a blue 1990’s model Chevrolet Blazer with Arkansas tags. 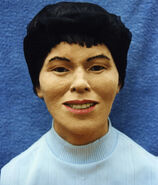