Elizabeth Short (July 29, 1924 - January 15, 1947), best known by the posthumous nickname as "The Black Dahlia" was an aspiring actress found brutally murdered in 1947. Her body remained unidentified briefly for an unknown amount of time. Short's unsolved murder remains highly prominent in the United States. 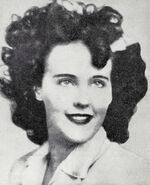 Newspaper clipping
Add a photo to this gallery

Retrieved from "https://unidentified.wikia.org/wiki/Elizabeth_Short?oldid=141459"
Community content is available under CC-BY-SA unless otherwise noted.