The child's remains were discovered in a softball field on the afternoon of September 13, 2019. A man walking his dog came across the remains, which were located directly across from a junior high school. There appeared to be evidence of a fire at the scene, although it has not specified if it was intentionally set or was related to the case.

Police stated they would withhold certain details about the case. They did, however, state that the child may have died earlier than the postmortem interval that was determined.

Dulce Alavez, who disappeared around the time Baby Elle was found, was quickly ruled out as a potential identity. Alavez was abducted days after the discovery of the remains, which effectively made it impossible for them to be the same person.

In October 2020, Brandon and Kristie Haas were arrested in connection with Emma's death. Emma was three years old when she died. Police are not sure what Brandon's relationship with Cole is, but court records from Indiana indicated Cole was Kristie Haas’s daughter.[1] 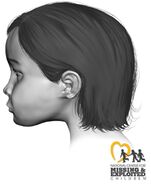 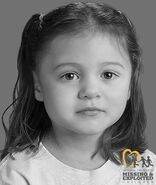 Retrieved from "https://unidentified.wikia.org/wiki/Emma_Cole?oldid=134491"
Community content is available under CC-BY-SA unless otherwise noted.