Floyd Arthur Wells is a United States Navy sailor who was was killed on the USS Arizona when the Japanese attacked Pearl Harbor on December 7, 1941. His remains were identified on June 17, 2019.

Floyd Wells was born to Earl and Edna Wells on April 18, 1917 in Cavalier, North Dakota. The second of five siblings, he grew up in Fairdale, North Dakota. He was an outstanding student and athlete during his years at Fairdale High School. In recognition of his achievements, he was awarded a scholarship to Concordia College in Moorhead, Minnesota upon graduation. According to his siblings, Wells was considered a top-notch baseball and basketball player.

On April 5, 1938, Wells enlisted the United States Navy from Minneapolis, Minnesota, his service number being 3285211. He was ranked Petty Officer 2nd Class with his specialty being Radioman 2nd Class. He was assigned to the crew of USS Arizona. During his service, Wells would send money from his military pay to his brother, Glenn, so that Glenn could attend business college in Minneapolis.

At about 7:48 AM on December 7, 1941, the Imperial Japanese Navy Air Service conducted a surprise military strike against the United States at the naval base in Pearl Harbor, Hawaii. The USS Arizona was hit by torpedo bombers, one of which detonated in a magazine, causing a violent explosion and the battleship to sink. Wells was killed in the attack, but his circumstances of his death are unknown. His remains were located between 1941 and 1944, but not identified. As a result, he was considered Missing in Action while his remains were buried in the Punchbowl at the National Memorial Cemetery of the Pacific in Honolulu, Hawaii.

Overall, 2,335 Americans, 1,177 on the USS Arizona, were killed in the attack. The surprise attack led to US President Franklin Delano Roosevelt to declare December 7, 1941, "a date which will live in infamy". The following day, the US Congress declared war on Japan which led to the United States' formal entry into World War II.

After his death, Wells was awarded the Purple Heart. He is memorialized at the USS Arizona Memorial and the Honolulu Memorial at the Courts of Missing at Court 2. He also has a cenotaph at the Cavalier Cemetery in Cavalier.

In 2015, the Department of Defense and the Defense POW/MIA Accounting Agency initiated a program to exhume the unidentified sailors of the USS Oklahoma to try and match their DNA against the DNA of family members whose loved ones were never identified. One of the caskets exhumed from the Nu’uanu Naval Cemetery, "X-97", did not match any of the missing personnel associated with the USS Oklahoma. So, the DPAA staff widened the scope of the analysis to include all personnel missing from the Pearl Harbor attack. Using anthropological analysis, circumstantial and material evidence, mitochondrial DNA (mtDNA) and autosomal DNA (auSTR), scientists identified "X-97" as belonging to Floyd Arthur Wells on June 17, 2019. The identification was announced on July 8, 2019.

Wells was buried on October 1, 2019 at 1:00PM at the North Dakota Veterans Cemetery at Mandan, North Dakota, with full military honors. 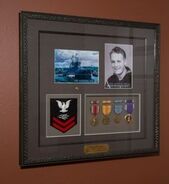 Floyd Wells' cenotaph at the Cavalier Cemetery in Cavalier, North Dakota.
Add a photo to this gallery

Retrieved from "https://unidentified.wikia.org/wiki/Floyd_Wells?oldid=128681"
Community content is available under CC-BY-SA unless otherwise noted.