On November 24th, 1978 a South Florida man was trying to locate a deer he had hit with his truck near a rest area off Interstate 10 West in Columbia County when he stumbled upon the bleached skeletal remains of a male. The remains were near freshly-planted pines that were growing on the property of the rest area. At the time, the rest area was fairly new and lies near the Suwannee County line.

the Florida Department of Law Enforcement and the Columbia County Sheriffs Office investigated the scene and combed for additional bones and clues that could have led to an identification on the John Doe, but were unsuccessful at finding all of his remains.

The remians were found near a piece of denim that may or may not be related to the victim.

​Some of the limbs and hands were not recovered.

The case was primarily investigated by the Columbia County Sheriff's Office (CCSO) for a number of years until it was shelved for a long period of time. In 1996, Robert Johnson, a deputy with the CCSO, discovered a box filled with bones and was able to connect the bones to the case in 1978. Quickly using the modern techniques at the time, he consulted with forensic artists with the FBI and Anne Coy of the Seminole County Sheriffs Office to do a sketch composite and a clay bust composite of the John Doe. After the bust was completed, Coy nicknamed the John Doe "Forrest". Additionally, Deputy Johnson composited an IdentiKit sketch of the John Doe.

After reopening Forrest's case, Deputy Johnson had Mitochondrial DNA extracted from the bones, in case a match should come forward. Forrest was uploaded to NamUs in 2008 by the Distrcit 4 Medical Examiner's Office in Florida.

In 2019, approved by the CCSO, Anthony Redgrave of the DNA Doe Project and *Trans Doe Task Force updated the facial reconstruction of Forrest after over twenty years of no movement in the case. This came after a few years of email exchanges between the CCSO and Jason Futch, an amateur sleuth who researched  John and Jane Doe cases in the area. Futch and Redgrave were able to convince investigators with the CCSO to approve this new facial approximation in hopes that it generates new leads in the case.

So far, there are only eight exclusions via NamUs. 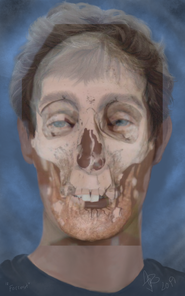 Skull overlay of Columbia County John Doe by Anthony Redgrave, 2019
Add a photo to this gallery

Retrieved from "https://unidentified.wikia.org/wiki/Forrest?oldid=62052"
Community content is available under CC-BY-SA unless otherwise noted.