Garfield County John Doe was a man whose skeletal remains were discovered in White River National Forest, Garfield County, Colorado in 2004. 22 men have been ruled out as being the decedent.

The man's remains were discovered inside a tent at a campsite in Flat Tops, an area of White River National Forest. He had extensive and high-quality dental work.

The first page of the notebook that was found with the remains is addressed to "Lib" and reads:

"I should write in case my situation here doesn't improve. This may be the end of my journey." "Would like for you to claim the body . . . services or memoreal. Cremation."

The next section could not be determined, although individual words such as "I" and "thought" and "favor" or "flavor" could be seen. More text could be interpreted on another page, but the writer's point is not clear. This sections reads:

"Third choice take them up in a glider (I promise not to get sick on you,"

Police believe he may have been from Australia as his sleeping bag case appeared to be branded "Perth, Australia." 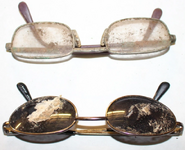 Radio Shack game
Add a photo to this gallery

Retrieved from "https://unidentified.wikia.org/wiki/Garfield_County_John_Doe_(2004)?oldid=139087"
Community content is available under CC-BY-SA unless otherwise noted.