Garvin County Jane Doe ​was a female between 21 and 35 whose body was discovered in a creek bed near Paoli, Oklahoma in 1987. Though her body was severely decomposed, it was determined that she had been shot in the back of the head in what the coroner termed an "execution style" homicide. The case remains unsolved.

On June 24, 1987 the skeletal remains of an unidentified female were found approximately 1 1/2 miles from the I-35 exit to Paoli in a creek bed. Despite the state of the remains, it was determined the victim had died as little as one month previous to discovery. Cause of death was listed as homicide due to the gunshot wound discovered at the back of the skull. The coroner termed this an "execution style" shot, and that the bullet used was possibly .38 caliber or more. She was buried as a Jane Doe in Mt. Olivet Cemetary in Pauls Valley in November 1987.

She had brown, possibly graying, hair and her eye color could not be determined. There were some unique physical features that may aid in the identification of this Jane Doe.

A condition called kyphoscoliosis affected her spine. Kyphoscoliosis causes an abnormal curvature in the spine that may cause a hunched appearance, uneven arms or legs, or an abnormal gait. Because her condition was termed to be mild, she may have only appeared to walk abnormally or complain of back pain during life. It is possible she was unaware she had this condition.

The victim had a unique dental condition, possibly temporomandibular joint disorder (TMJ). There was evidence she had seen at least 2 dentists, and one of these dentists was possibly a new graduate at the time. A TMJ misalignment causes pain around the face and jaw, difficulty chewing, and unevenness when biting. She likely would have complained about these symptoms while alive. Furthermore, the misalignment of her jaw may have been visually obvious, and was replicated in one facial reconstruction.

Several items discovered near the body may have belonged to the victim: 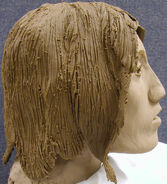