Harold William Hayden is a United States Marine who was killed in action during during the Battle of Tarawa on Betio Island of the Gilbert Islands, now part of Kiribati. His remains were located in March of 2019 and identified on March 30, 2020.

Harold Hayden was born in Norwood, Ohio on September 28, 1924 to Donald Schuyler and Clara Hayden. He grew up in Hamilton County, Ohio with three other siblings: Phyllis, Donald, and June. The family was known to move around the Cincinnati area and have homes in Norwood and Deer Park, Ohio. Donald and Clara eventually divorced, and she married to a man named John Long and the family moved to Bond Hill in the 1930s.

Few details are available about Hayden's childhood and teen years. What is known however, is that he was an avid golfer and worked as a caddy at the Maketwah Country Club. His family's Bond Hill home at 5649 Prosser Avenue was a short walk to the club. In 1941, he bested all his colleagues to win the club's amateur championship. During this time, he would use his stepfather's name; in the 1940 census he was listed as "Harold W. Long."

On September 21, 1942, one week before his eighteenth birthday, Hayden enlisted in the United States Marine Corps, opting to use his birthname when enlisting. He was sent to Parris Island, South Carolina for boot camp and was assigned to the 11th Replacement Battalion in the winter of 1942. He crossed the country with the 11th Replacement Battalion and departed from Camp Pendleton, Florida in early 1943. On April 6, 1943, he was assigned to Company A, First Battalion, 6th Marines spent the next four months training in New Zealand. In the summer of 1943, he was promoted to the rank of Private First Class. He was assigned to a light machine gun squad along with another new Marine, PFC Wendell Perkins. The two quickly became fast friends, learning to rely on each other in the field and on liberty in Wellington.

The 2nd Marine Division landed on Betio Island on November 20, 1943 as part of Operation Galvanic, the US Invasion of the Gilbert Islands. The mission was to take control of the airfield on the Tarawa Atoll so that Japanese Imperial Army would be less close to the United States and the United  States would be closer to Japan. Most of the fighting would occur on Betio Island as it was the largest of the islands on Tarawa Atoll.  This battle would prove critical for the American offensive and the first time they faced serious Japanese opposition as they were well-supplied and prepared and fought to the last man standing.

The 6th Marines landed on the evening of November 21, 1943. On the morning of November 22, 1943, the First Battalion advanced east on Betio's Black Beach pushing the Imperial Japanese Army toward the far end of the airstrip. In the late afternoon, the Marines halted for night and began setting up their defense lines with well-positioned and well-supplied machine guns. Perkins went to setup the squad's weapon while Hayden went to search for more ammunition. In an interview with Leatherneck Magazine in 2020, Perkins stated, "We were setting up our defenses, and Harold was bringing a box of ammunition up to me," Perkins told Leatherneck Magazine in 2020. "He got alongside of me and set the box down and just about that time he got hit."

Hayden was killed by a gunshot wound to the head. The next day, US Forces would take over the island. Overall, 1,696 US Marines were killed and 2,101 were wounded and 4,690 Imperial Japanese Army soldiers and construction laborers were killed and 146 were captured.

After his death, Hayden was awarded the Purple Heart. The medals were presented to his mother in the summer of 1944. His death was announced to his family on December 24, 1943.

The day after his death, Hayden's remains were buried in Grave #22 of Row D of Cemetery 33 on Betio Island. However, they were not recovered and identified when the 604th Quartermaster Graves Registration Company conducted remains recovery operations between 1946 and 1947. In 1949, a military review board declared him non-recoverable.

His name is inscribed within the Courts of Missing at the Honolulu Memorial in Honolulu, Hawaii.

In March of 2019, History Flight Inc. discovered what is thought of as Row D of Cemetery 33 on Betio Island. The remains of US Marines found were sent to a DPAA laboratory and identified based on anthropological and dental analysis and circumstantial and material evidence. Using these techniques, Harold William Hayden's remains were identified on March 30, 2020. His identification was announced on July 29, 2021. He will be buried in Arlington Cemetery in Arlington, Virginia with full military honors at a yet-to-be-determined date. 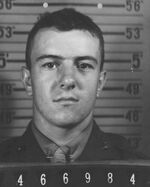