Strangulation
Hillsborough Jane Doe was a teenager or a young woman found murdered in Hillsborough, North Carolina in 1990. 45 women have been ruled out as being the decedent.

On September 19th, 1990, the decomposed remains of a female were located by a cleanup crew along Interstate 40 approximately 15 feet down an embankment, east of the New Hope Church Road exit. She was concluded to have died from strangulation.

The unique design on the woman's shirt could not be identified by national investigation services such as the FBI and NCIS.

Despite intensive investigation and follow-up on hundreds of leads, her identity as well as that of her killer remains a mystery.

However, police noted a possible link between this case and other murders committed by a taxi driver. The man was arrested in Guilford County and was suspected to have murdered women in a similar way, merely months after this victim was killed. The man later committed suicide after declining an interview with Orange County officers. The man’s identity was never publicly released.

The fact that the victim's socks were noted to be very clean and the absence of footwear indicates her killer may have taken her shoes as a souvenir.

There is a possibility that prior to her discovery she may have been last seen alive walking along I-85 near N.C. 62 near the Ramada Inn, as a woman matching her description was observed. She may have also been seen at a truck stop in Alamance County.

The victim's remains were later cremated and buried at sea, and her DNA is available for comparison with this known information. 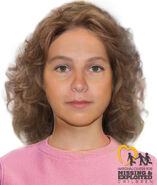 Retrieved from "https://unidentified.wikia.org/wiki/Hillsborough_Jane_Doe_(1990)?oldid=139225"
Community content is available under CC-BY-SA unless otherwise noted.