Unidentified Wiki
Register
Don't have an account?
Sign In
Advertisement
in: Male, Killed in action, Cases with Wikipedia articles,
and 10 more

Jack Earl Hill is a United States Marine who was killed in action during during the Battle of Tarawa on Betio Island of the Gilbert Islands, now part of Kiribati. His remains were located in March of 2019 and identified on June 26, 2020.

Jack Hill was born on March 11, 1922 in Billings, Montana to Earl and Nellie Hill. During his childhood, the family moved several times, and he attended schools in Billings, Forsyth, and Custer, Montana. He developed a reputation as an athlete and he played on the championship Custer High School football team in 1941. In 1940, Jack and Earl lived in Custer while Nellie and Jack's younger sister, Betty Jean, lived in Casper, Wyoming. They made frequent visits and eventually Jack made Casper his permanent residence.

Hill enlisted in the United States Marine Corps on February 10, 1942 from a recruiting station in Denver, Colorado. After completing boot camp, he was assigned to Company D, First Battalion, 6th Marines. He trained to be a heavy machine gunner and carried a water-cooled Browning M1917 weapon while in California and New Zealand and participated in the Battle of Guadalcanal.

The 2nd Marine Division landed on Betio Island on November 20, 1943 as part of Operation Galvanic, the U.S. Invasion of the Gilbert Islands. The mission was to take control of the airfield on the Tarawa Atoll so that Japanese Imperial Army would be less close to the United States and the United  States would be closer to Japan. Most of the fighting would occur on Betio Island as it was the largest of the islands on Tarawa Atoll.  This battle would prove critical for the American offensive and the first time they faced serious Japanese opposition as they were well-supplied and prepared and fought to the last man standing.

Hill landed on the island on the night of November 21, 1943. The next day, he was killed from shrapnel wounds to his chest, stomach, and groin.

The day after Hill was killed in action, US Forces would take over the island. Overall, 1,696 U.S. Marines were killed and 2,101 were wounded and 4,690 Imperial Japanese Army soldiers and construction laborers were killed and 146 were captured.

After his death, Hill was awarded the Purple Heart. His death was announced to his family on January 6, 1944.

Hill's remains were recovered and buried in Row D of Cemetery 33 on Betio Island. However, they were not recovered and identified when the 604th Quartermaster Graves Registration Company conducted remains recovery operations between 1946 and 1947. In 1949, a military review board declared him non-recoverable.

His name is inscribed within the Courts of Missing at the Honolulu Memorial in Honolulu, Hawaii.

On March 2019, History Flight Inc. discovered what is thought of as Cemetery 33 on Betio Island. The remains of U.S. Marines found were sent to a DPAA laboratory and identified based on historical records, circumstances, dental analysis, and DNA evidence. Using these techniques, Jack Earl Hill's remains were identified on June 26, 2020. His identification was announced on March 18, 2021. He will be buried in American soil with full military honors.

Photograph of Hill with his mother, Nellie, in 1935. 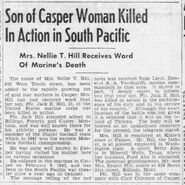