Unidentified Wiki
Register
Don't have an account?
Sign In
Advertisement
in: Male, Killed in action, Cases with Wikipedia articles,
and 13 more

James Earl Wright was a United States Army officer who went missing in action during the Battle of Metz on September 10, 1944. His remains were located on February 27, 1945 and identified on July 9, 2021. 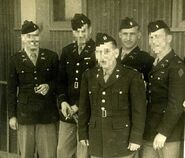