Three people discovered her body in a dumpster upon noticing a foul odor coming from it. There had been reports prior to February 14 about an odor coming from the dumpster, but the source of the smell was not investigated.

The victim was placed inside of a duffel bag after being wrapped in plastic. It is unknown if she was placed in the plastic before or after her death. Bedding items and other home goods were found with the body. The nature of the items suggests that they personally belonged to the victim, and some law enforcement investigators believe they probably came from her own bedroom. These included the following:

No clothing has been reported to have been found with the victim. A rape kit produced negative results, but other forms of unconventional sexual assault have not explicitly been ruled out.

Decomposition made it difficult to determine much of her features, and her initial reconstruction is described to have "not depicted her as well as [investigators] would have liked." One of the features in question was her eye color, which was listed as indecipherable by some sources, although the Georgia Bureau of Investigation claims her eyes were brown.

An autopsy failed to reveal a definitive cause of death, but it is generally believed that she was killed via asphyxiation, possibly by way of being smothered by one of the bedding items found alongside her.

Someone apparently confessed to her murder, but this suspect has since died. 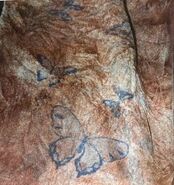