Jessica Ashley Manchini was a 29-year-old woman whose skeletal remains were discovered inside a suitcase in a wooded area off I-985 in Buford, Georgia in 2016.

Jessica was born in Pennsylvania, and later moved to Georgia.

The suitcase had not been thrown from a vehicle and had been placed at the location.

Manchini was reported missing in December 2014 by her mother. A faded tag in the suitcase was reexamined and provided a partial name and address. She was identified through dental and medical records in June 2019. 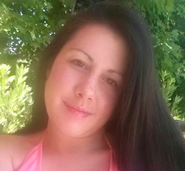 Shoes
Add a photo to this gallery

Retrieved from "https://unidentified.wikia.org/wiki/Jessica_Manchini?oldid=126592"
Community content is available under CC-BY-SA unless otherwise noted.