"Johnny Lee Mills" was an alias used by an unidentified teenage male that had been arrested in St. Louis in 1990 on suspicion of being a runaway. He ran away from the youth shelter in Maryland Heights before his identity could be confirmed.

All information given by him, including his name, age and other details, turned out to be false and his true identity has never been discovered. He was also using the names "Steve(n) L. Johnson" and "Randi Smith."

It's unknown what happened to him after leaving the shelter; due to the lifestyle he led, it was theorized he may have met with foul play and may even be one of the unidentified bodies across the country.

There were theories he fell victim to a serial killer focused on young male prostitutes, however, this theory had been proven to be false, as there was no serial killer in the area at that time. There's also the possibility he is still alive and even may have reunited with his family or guardians. 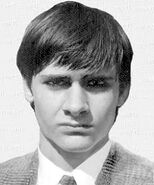