Unidentified Wiki
Register
Don't have an account?
Sign In
Advertisement
in: Female, Homicide by exposure, 2019 identifications,
and 9 more

"Julie Valentine" is the nickname given to a previously unidentified infant who was discovered in Greenville, South Carolina, in 1990. In 2019, her mother, Brook Graham, was identified through genetic genealogy and charged with her murder. Her case would later inspire a song by a Washington-based rock band. A local center, for victims experiencing trauma during childhood, would rename their organization after the victim 21 years after she was found. Additionally, a memorial sculpture was created for the baby at the Cleveland Park.

The infant was found inside a box, concealed by bedding, in a trash-littered field along a road off Interstate 385, that was behind a local shopping center. She was born about five days before she was discovered, and her umbilical cord had not been severed from her body. As her discovery was just before Valentine's Day, police decided on the nickname she would be known by posthumously.

The box was from a vacuum cleaner that had been purchased by her father, who had given it to Graham. The man, whose relationship with Julie Valentine's mother eventually ended, was identified through a paternity test but did not face legal penalties. His name was omitted from the public for his privacy; he cooperated with investigators and denied ever knowing about the fate of his daughter. Graham was first observed to share a likely parent-child relationship with the baby girl, and another test eventually confirmed she was, indeed, Julie Valentine's mother.

A year before Julie Valentine's death, her mother had also allegedly neglected her infant son. She had numerous arrests for financial crimes and at least one racially-motivated act of violence, being first arrested seven years before disposing of her daughter's body. 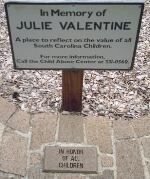