Homicide
Kathy Buxton was a woman whose remains were discovered in Oregon in 1996.

Buxton's remains were discovered near a wooded trail in Polk County, Oregon by hunters. Her body had been wrapped in a tarp. The cause of death was ascertained to be homicide based on the manner in which the body was disposed. A bag containing men's clothing was discovered near the body and it included underwear with a semen stain.

Buxton was identified with the use of genetic genealogy after investigators matched her DNA to a long lost sister who hadn't seen Kathy in decades. The sisters were separated after their father took Kathy to Oregon. The investigators also located some of Buxton's children. The main suspect in her murder is her husband Brian Clifton. He had a murder conviction dating to 1973 but was released on parole in 1981. The couple married in 1984 but he never reported her missing and later married someone else. The semen stains produced a sibling match when matched to his sister and the investigation is ongoing. 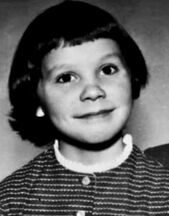 Kathy as a child