Unidentified Wiki
Register
Don't have an account?
Sign In
Advertisement
in: Female, Presumed homicides, Discovered near highways,
and 9 more

Kimberly Rena Jones was a teenager whose body was discovered along a highway in September 2016.

She was identified in late July 2021.

Kimberly's unclothed body was discovered along US Highway 93 in Mohave County, Arizona. The road is frequented by people from the southern part of the state as well as Las Vegas, Nevada.

No cause of death was determined, but authorities are investigating the case as a homicide. One particularly suspicious element of the discovery was that the body had been left nude in close proximity to a highway.

After the young female remained unidentified, investigators recruited artist Harvey Pratt from the Oklahoma Bureau of Investigation, who created a postmortem touch-up of Jones’ mummified features. The rendering was closely based on morgue photos, and features such as the victim’s mouth and neck had not been drawn over. The National Center for Missing & Exploited Children later created their own rendering, which they featured on a poster in their database weeks after the discovery was made.

Eventual isotope testing indicated she was native to the "far Northeastern" United States or possibly Canada. In reality, she went missing from California. 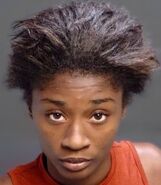