Lady of the Dunes

Lady of the Dunes was a woman found murdered in Provincetown, Massachusetts in 1974.

The victim was found in an advanced stage of decomposition on July 26, 1974. Her hands had been severed from her body and were never located. This suggested she may have been fingerprinted during life, possibly from criminal activity.

Her killer made additional efforts to hinder identification by removing some of her teeth.

She had been struck on the side of the head, which caused a massive injury. She was nearly decapitated as well. A block of wood was used in a sexual assault.

Whitey Bulger, a former FBI Top Ten Most Wanted fugitive was reportedly seen in the area with a woman matching the victim's description. He was listed as a person of interest in the case. Bulger was murdered in prison in late 2018.

Hadden Clark, who was convicted of two murders, confessed to the victim's murder. His statement is believed to be untrue, as he suffers from paranoid schizophrenia.

In 2015, the son of writer Stephen King introduced a theory that Lady of the Dunes may have been an extra in the 1975 film Jaws, which was filmed in Massachusetts during the summer of 1974. The extra in question is a young woman wearing a bandana and jeans, which were coincidentally worn by the victim. Authorities have, however, stated that this theory is "wild speculation." 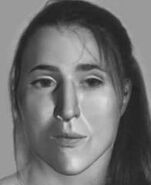 Image of victim depicted with freckles 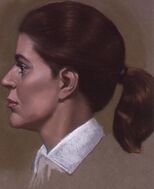 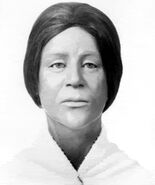 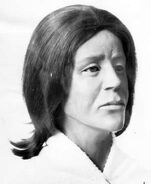 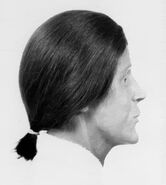 Extra in the 1975 film Jaws speculated to be the victim

Retrieved from "https://unidentified.wikia.org/wiki/Lady_of_the_Dunes?oldid=170951"
Community content is available under CC-BY-SA unless otherwise noted.