Unidentified Wiki
Register
Don't have an account?
Sign In
Advertisement
in: Female, Suspected homicides, Cases with Wikipedia articles,
and 15 more

Lamduan Armitage (née Seekanya) was a woman who was found deceased in 2004 in North Yorkshire, England. Her cause of death has never been determined, yet homicide is suspected. Before her identification, she was known as "Lady of the Hills."

She was identified in March 2019. Her husband is pointed as a suspect in her murder, although he denied involvement.

Lamduan was originally from the Udon Thani province in northeast Thailand. She and her husband moved to England where they had lived in Portsmouth and Rugby, and had three children. In 2003 they moved from Rugby to Cumbria to live with his parents. Following Lamduan's disappearance, her friends and family had been told she had vanished or had returned to Thailand. Lamduan's husband moved back to Thailand several years ago.

Lamduan was discovered face down in a stream on September 20, 2004, near the village of Horton on the Pennine Way in North Yorkshire, England. She was wearing only socks and jeans and a ripped bra hung from her left arm. Due to decomposition, her cause of death could not be established but it was concluded that she had not been shot, bludgeoned or stabbed. Despite public appeals for information, no leads could be generated regarding her identity and she was nicknamed Lady of the Hills.

In early 2019, it was announced that investigators were examining a link between Lady of the Hills and a woman who had not been heard from since 2004. According to her family, she is originally from Thailand, married a British man in 1991 and moved to the north-west of England four years later. In March 2019, fingerprints and DNA identified her as Lamduan Armitage. 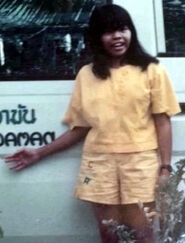