Lancaster County John Doe was a male who was found deceased in Pennsylvania in 1998.

The decedent was found in the Susquehanna River by a fisherman near Turkey Point in Manor Township, Pennsylvania on April 18, 1998. There was no evidence of trauma to his body. His cause of death was ruled a drowning, but his manner of death remains unknown. 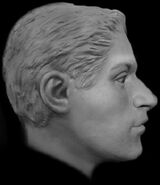 Retrieved from "https://unidentified.wikia.org/wiki/Lancaster_County_John_Doe_(1998)?oldid=128547"
Community content is available under CC-BY-SA unless otherwise noted.