Larry Norman Frost is a man who was killed in the Upstairs Lounge arson attack on June 24, 1973. His remains were identified in 2018.

Larry Frost was born near Detroit, Michigan to Wilfred “Fred” Glenvil Frost and Dorothy Ruth Squires on April 11, 1941. He was the oldest of their five children, followed by Ruth, Donald, Mark, and Nancy. According to Nancy, Larry was a "Soft-spoken, gentle person," and a "fun brother" who was good with children. He and Ruth were also close with his niece and Ruth's daughter, Lynette, stating, "They were each other's favorites. My mom loved him."

When he became of age, Frost began moving around the country. In his twenties, he was severely injured in a car accident that resulted him to have metal implants in his cheekbones. Despite him constantly moving around, Frost kept in touch through letters for his family member's birthdays, anniversary's and holidays. At some point in his life, he became the bar manager for the Dauphine Orleans in New Orleans. He would also become a member of the Metropolitan Community Church and be a frequent at the UpStairs Lounge, a gay bar on the second floor of the three-story building at 604 Iberville Street in New Orleans.

At 7:56 PM on the night of June 24, 1973, the front staircase of the bar was engulfed in flames. As the fire spread, patrons tried to escape, but many were trapped by the locked exit door and bars on the windows. Additionally, the fire department was stuck in traffic causing the fire to spread further. Eventually, the fire department arrived and put out the fire by 8:12 PM. Thirty-two people were killed and fifteen other were injured. Until the Pulse Night club shooting on June 12, 2016 in Orlando, Florida, this attack was the deadliest known attack on a gay club in United States history.

Although the cause of the fire is still listed as "undetermined origin," it is considered an arson attack due the smell of lighter fluid being present. The prime suspect was Roger Dale Nunez, a young gay man who was diagnosed with "conversion hysteria" in 1970 and had visited psychiatric clinics in the past. Nunez was known to have been kicked out of the bar multiple times. In fact, Nunez was kicked out of the bar on the night of the attack. Police questioned him on the attack two times, the first time he could not respond due to his broken jaw from a previous fight. The second time he was questioned, Nunez was relaxed and did not appear nervous. However, a friend of Nunez's stated that he confessed to starting the fire to him by going squirting the bottom steps with Ronsonol lighter fluid that he bought at a local Walgreens and tossing a match. Nunez apparently did not realize that the fire engulf the whole building.

Nunez committed suicide on November 10, 1974. No suspects were convicted and the fire marshal closed the case in 1980.

Although there is no evidence to suggest homophobia was the motive in the attack, the attack was ignored and even mocked by members of the public, the press, the authorities, and the local government. Four of the victim's-three unknown white men and Ferris LeBlanc, were never claimed by family members, likely because the families were embarrassed that their relatives were members or sympathetic to the LGBT community.

Oddly, police documents and testimony from witnesses, including other patrons and his landlord, showed one of the three unidentified men was believed to be Frost. Apparently his mother was informed that one of the arson victims was her son, but Dorothy would remain silent and apathetic to the situation until her death.

Anonymous individuals paid for the unknown men's burial and with LeBlanc they were buried in an unmarked mass grave at Holt Cemetery. In 2015, they were reburied in separate coffins in a city-owned field behind Resthaven Memorial Park on Old Gentilly Road. In 2003, on the thirtieth anniversary of the fire, a memorial plaque was installed in the sidewalk outside the former entrance of the UpStairs Lounge. It displays the names of all the victims, with “Unidentified White Male” listed for each of the three unknown victims.

On June 24, 2015, the forty-second anniversary of the Up Stairs Lounge arson, UPSTAIRS INFERNO, a feature length documentary about the tragedy written, directed and produced by Robert L. Camina, had its World Premiere in New Orleans at the historic Prytania Theatre. In 2018, after speaking to Frost's remaining family members and conducting research based on police documents and witness testimonies, Camina confirmed one of the three unknown victims is Larry Norman Frost. Frost is still buried at Resthaven Memorial Park. 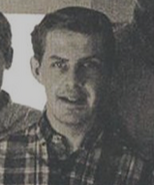 Larry and Ruth in the late 1940s.
Add a photo to this gallery

Retrieved from "https://unidentified.wikia.org/wiki/Larry_Frost?oldid=159915"
Community content is available under CC-BY-SA unless otherwise noted.