Larry Joe Porter (1952 - April/May 1997) was a male who was found in the Great Miami River near Reigart Road in Fairfield, Ohio in 1997. He was likely the victim of a hit and run, or may have been thrown from impact of the accident. His official cause of death was undetermined.

He was identified in August 2020, with assistance from the DNA Doe Project.

Larry was last seen in the fall of 1996. He often frequented the area where his remains were located. He had lost touch of his family and is believed to have died in April or May of 1997. 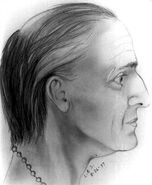