Unidentified Wiki
Register
Don't have an account?
Sign In
Advertisement
in: Male, Homicide by strangulation, 2021 discoveries,
and 16 more

Liam Husted was a boy whose body was discovered on May 28, 2021. The case garnered attention after he was misidentified as a different child who disappeared from the same area who was later found alive. While unidentified, he was given the nickname "Little Zion".

He was identified on June 7, 2021. His mother, Samantha Moreno Rodriguez, was arrested for his murder.

On the morning of May 28, 2021, Liam's body was found by hikers within hours and a day after he was killed. The location was close to State Highway 160.

After the discovery was publicized, a woman contacted authorities, believing the body belonged to her missing son, who was later found alive with his brother and father in Utah. Police acknowledged a strong resemblance between the two, and supported the mother's visual identification based on the sketch and morgue photographs. Shortly thereafter, NCMEC was contacted to create their own rendering.

On June 3, the FBI became involved in his case and offered a $10,000 reward for any information regarding his identity. This has been the first time in many years that the FBI have assisted the Las Vegas Police Department with identifying the decedent. 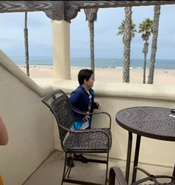