Unidentified Wiki
Register
Don't have an account?
Sign In
Advertisement
in: Male, Cause of death not stated, 2010 discoveries,
and 9 more

Not stated
Manuel Oriz was the name used by an unidentified male found dead in Arizona in 2010, alongside Manuel Pu Meregildo and Agustin Antonio Castroe. This male was later identified through fingerprints as a subject previously apprehended in 2006 for crossing the border illegally. He was possibly native to Guatemala.

He was identified in September 2017 alongside his adult companion. 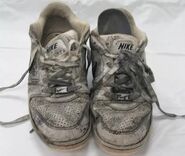