Marion County John Doe is a man found murdered on July 18, 1980 in Marion County, Oregon. He is believed to be a victim of Randy Steven Kraft.

The victim was located on the gravel shoulder of the northbound lane of the I-5, one mile south of Woodburn, Oregon. He had been dead for two to three hours and his blood contained 0.06% alcohol and diazepam.

Authorities determined this victim was drugged, sexually molested, and strangled. His bootlaces and belt were missing and his pockets were turned inside out suggest he was also robbed. Police also suspected the victim was a transient hitchhiker see north of Salem, Oregon at around 2:30 AM, less than two hours before the victim was found. Police sent teletypes and fliers across the country and checked military and FBI records in hopes of identifying the victim. They even sent fingerprint records up to Canada, but nothing ever came up.

This man is believed to be a victim of Randy Steven Kraft, known as the "Scorecard Killer," who is responsible for up to 67 murders of young boys and men in mostly California. Kraft was never convicted for this murder, but law enforcement is certain Kraft is responsible because of the subtle reference of the victim in Kraft's scorecard and the victim being drugged and strangled with a ligature cord fits Kraft's modus operandi. Even before Kraft's capture, authorities noted the similarities between this victim and the murder of Michael O'Fallon on July 17, 1980 and the murders of Kraft's early victims in Southern California. This victim is referred to as "Portland Elk" on the scorecard Kraft had of victims. 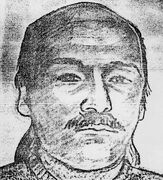 Previous sketch
Add a photo to this gallery

Retrieved from "https://unidentified.wikia.org/wiki/Marion_County_John_Doe_(1980)?oldid=133288"
Community content is available under CC-BY-SA unless otherwise noted.