Michael Joseph Blassie (April 4, 1948- May 11, 1972) was a United States Air Force officer killed in action during the Battle of An Lộc in the middle of the Vietnam War. Before his remains were identified, he was buried as the unknown soldier from the Vietnam War at the Tomb of the Unknown Soldier in Arlington National Cemetery.

Michael Joseph Blassie was born on April 4, 1948, in St. Louis, Missouri to George C. and Jran Frances Blassie. He was the oldest of five siblings-three sisters and one brother- and their relationship was described as "close", with the younger siblings looking up to their older brother.

After graduating from St. Louis University High School, Blassie entered the United States Air Force Academy where he graduated from in 1970. He then attended Undergraduate Pilot Training at the Columbus Air Force Base, receiving his aeronautical rating as an Air Force pilot in 1971 and was qualified to pilot a Cessna A-37B Dragonfly.

Blassie was assigned to the 8th Special Operations Squadron as a First Lieutenant and was deployed to Vietnam on January 31, 1972. He reportedly flew 132 missions in less than four months. On May 11, 1972, he participated in the Battle of An Lộc where his plane was shot down by the ground enemy fire and crashed. His wingman, Major James Connally, witnessed the crash, and Blassie was declared KIA but due to the intense fighting in the area, his remains could not be recovered for another five months. When a team made up of US Army personnel and an ARVN reconnaissance patrol arrived at the scene, they recovered six bones, a wallet containing a family picture, Blassie's military ID, a parachute, a one-person life raft, dog tags,  part of a flight suit, and the remnant of a South Vietnamese pistol holster. They were turned in to Captain William C. Parnell who saw Blassie's name on his ID card and wrapped them in plastic. He sent them to the US mortuary Saigon and the remains moved to the mortuary in Thailand. In 1976, the remains and evidence, without the wallet and ID, were turned in to the USA Army Central Identification Laboratory in Hawaii (CILHI). While they were believed to be Blassie's remains, chief physical anthropologist, Tadao Furue believed the age, height, and weight did not match Blassie's description and labelled them as "X-26" with Blassie registered as missing in action (MIA). Meanwhile, the day after Blassie was killed, an Air Force chaplain told his parents Blassie was KIA, but his remains were unrecoverable.

After the Vietnam War ended, the US Congress faced intense pressure by Vietnam veterans to include a Vietnam veteran to the Tomb of the Unknown Soldier which contains the remains of unidentified American soldiers from World War I, World War II, and the Korean War. Although President Richard Nixon and Congress liked the idea, thinking it could heal the wounds as the war was very divisive, when North Vietnam seized power in 1975, the US wasn't able to send teams to search for their MIAs and unrecovered KIAs until diplomatic relations resumed in the mid-1980s.

However, the CILHI had four sets of unidentified remains, including X-26, they could choose from. In 1983, the Defense Department ordered the CILHI to choose one of the sets of remain. Two of the remains were identified via dental records and a third set's nationality was in question so the head of the CILHI, Major Johnie Webb, chose X-26 to be buried, even though the remains were only three percent of the body (80 percent is the deemed suitable requirement for burial in the Tomb of the Unknowns). Although he was ordered to destroy the records he had on X-26, Webb disobeyed orders and saved the file and placed the objects in the casket.

On May 17, 1984, X-26's remains were designated as the Vietnam Unknown by Sergeant Major Allan J. Kellog Jr. at a ceremony in Pearl Harbor. They were then transported aboard the USS Brewton to Naval Air Station Alameda which in turn were sent to the Travis Air Force Base on May 24, and arrived at Andrew Air Force Base the following day.

On Memorial Day of 1984, he was escorted by an Army caisson from the Capitol to the Memorial Amphitheater at Arlington National Cemetery. The ceremony was attended by 250,000 people. He was buried under a headstone reading, "Here rests in honored glory an American soldier known but to God." President Ronald Reagan presided over the funeral, presented the Medal of Honor to the Vietnam Unknown, and acted as next of kin by accepting the interment flag at the end of the ceremony. After placing the Medal of Honor on the flag-draped casket, Reagan said, “Thank you, dear son, and may God cradle you in his loving arms.”

Eventually, Furue's methods became controversial and were found to have been flawed after several misidentifications. An author, Susan Sheehan published a book in 1986 on the subject called, The Missing Plane, and referenced X-26 several times. This caught the eye of Vietnam veteran and activist Ted Sampley. His research made the conclusion that X-26 and Michael Blassie were the same person and published his findings online in 1994.

Three years later, CBS Evening News reporter Vince Gonzalez reported that the remains were Blassie based on his own investigations under the Freedom of Information Act and further interviews with Parnell who was living in Florida and retired. Similarly, U.S. Veterans Dispatch articles dating 1994 and 1996 made the same claims based on US Defense Department records.

On May 14, 1998, the remains were exhumed and Blassie's mother and his oldest sister, Judy Cozad, provided blood samples. Mitochondrial DNA proved that Michael Blassie was X-26 and therefore, Vietnam Unknown, and his identification was announced on June 30, 1998. His body was released to his family on July 10, 1998, and he is now buried with full military honors at the Jefferson Barracks National Cemetery, Section 85, Lot 1,  in Lemay, Missouri. Although the Medal of Honor Reagan awarded him did not transfer after his identification, Blassie was awarded the Silver Star, Distinguished Flying Cross, the Purple Heart, the Air Medal, the National Service Defense Medal, and the Vietnam Service Medal. 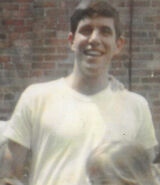 Blassie on a A-37B Dragonfly. 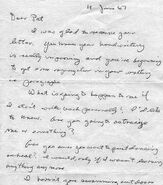 Letter to his family. 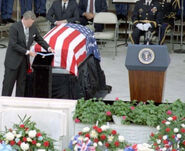 Interment ceremony for Unknown Serviceman of Vietnam Era at Tomb of Unknowns, Arlington National Cemetery, May 28, 1984. 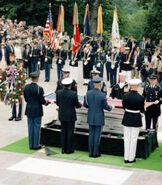 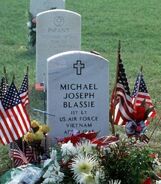