Unidentified Wiki
Register
Don't have an account?
Sign In
Advertisement
in: Featured cases, Female, Homicide by strangulation,
and 18 more

Michelle Yvette Busha was a woman who was reported missing on May 9, 1980, from Bay City, Texas. Her body was found in a drainage ditch on May 30, 1980, in Blue Earth, Minnesota. It appeared she had been strangled. She was identified when her body was exhumed in August 2014 to obtain new DNA samples, and the DNA was positively matched to samples submitted by Busha's family members in 2007.

The victim had died about 3-7 days prior, due to strangulation. The victim wore no clothing and her feet were heavily calloused. Her head was shaved, except for a small spot. All ten fingernails had forcibly been removed by her killer.

Nine years later, Robert Leroy Nelson confessed to sexually assaulting and murdering the victim and was charged. She was an apparent hitchhiker. 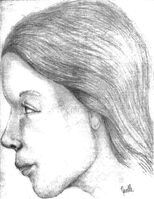