Miguel Armando Quiroz Ortiz is a young man who was killed during the Los Angeles Riots of 1992. His remains were located on May 2, 1992 and identified on April 6, 2017. Until he was identified, he was referred to as "John Doe #80." Additionally, he is the last victim of the riots to be identified.

Miguel Quiroz Ortiz, raised in Oaxaca, Mexico, arrived to Los Angeles, California for job opportunities in the late 1980s. He kept in contact with his family through letters and sent money he made from his bakery job on Florence Avenue to his mother. During his time there, he used three aliases, including the alias, "Armando Ortiz Hernandez."

His family described him as "playful, protective, and friendly, and who loved sports very much". According to his family, Quiroz Ortiz liked auto mechanics and used to work at an auto shop in Mexico. He hoped with his job in the United States he could buy his own auto shop and provide his family back home a better life.

His sister last heard from him from a phone call in 1992.

Between April 29 and May 4, 1992, thousands of people in the Los Angeles metropolitan area looted the city and participated in acts of arson, assault, and murder. Sixty-three people were killed, two thousand and three hundred and eighty-three people were injured, and twelve thousand and a hundred and eleven people were arrested before the California National Guard, the U.S. military, and several U.S. federal agencies restored order, but the military did not leave the city until May 27.

On May 2, 1992, the charred remains of a young man were found inside a Pep Boys store that was reportedly burned by looters on South Vermont Avenue and 58th Street on the second day of the riots. Investigators recovered pieces of denim pants, light blue underwear and a .38-caliber casing in a pants pocket.

It appeared the victim suffered a skull fracture, likely from a punch, before dying in the store of smoke inhalation. The bullet was sent to the lab for ballistic testing, but there was no match to any other crime scenes. Only one middle fingerprint was able to be lifted from the remains.

The victim, dubbed John Doe #80, stayed in the coroner's office until he was cremate on July 22, 1992, and his ashes were buried n in an indigent grave in Evergreen Cemetery in Los Angeles.

In 1993, Quiroz Ortiz's mother reported him missing after failing to reach him. His family had no idea what happened to him and hoped he was alive.

The Los Angeles Medical Examiner regularly ran the lifted fingerprint through the national database, but it was not until they received help from the FBI that they received a match from Quiroz Ortiz's fingerprint records on April 6, 2017. On May 12, 2017, his sister was notified. 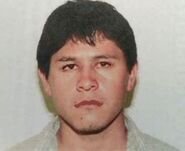 Crime scene.
Add a photo to this gallery

Retrieved from "https://unidentified.wikia.org/wiki/Miguel_Quiroz_Ortiz?oldid=160303"
Community content is available under CC-BY-SA unless otherwise noted.