The victim was discovered by a lost motorist from Baltimore, Maryland who pulled over off Marsh Road near Interstate 95 in Brandywine Hundred to check a map. He was blindfolded, wrapped, and dumped along the roadside.

Based on his wear facets and heavy tartar and tobacco deposits, the victim was probably over thirty years old.

A seven-digit number was written in one shoe and it was possibly the former phone number of a Domino's Pizza in Brick, New Jersey. It is unknown if this clue led anywhere. His fingerprints and dental records were taken and his His nuclear DNA and mtDNA profiles are currently in the CODIS system, but no matches have been made.

The victim was buried in plot 00275 of New Castle County Potters Field Cemetery in New Castle, Delaware. His previous 3D reconstruction is located at the Delaware State Police Museum and Educational Center along DuPont Highway in Dover, Delaware. 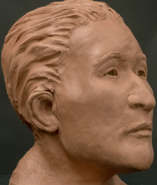 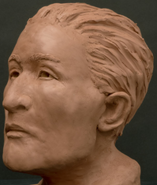 Retrieved from "https://unidentified.wikia.org/wiki/New_Castle_County_John_Doe_(1993)?oldid=162861"
Community content is available under CC-BY-SA unless otherwise noted.