Nicki Virginia Lee Elkins was a teenager who disappeared after visiting her family in Miami, Florida in early 1981. Her body was discovered on March 9 of the same year, having been killed by blunt trauma to the head. She was identified in 2020 after investigators noticed similar physical characteristics between Elkins and the unidentified woman. The match was confirmed in late September of 2020. She was known to use the alias name "Nichol Michele Emens."

Elkins, originally from Virginia, traveled to Florida to visit relatives in early 1981. On Valentine's Day, departed from her family's residence in Miami, Florida, on February 14, 1981, stating she would be visiting her boyfriend, whom she did not identify by name. She was last seen walking from the home with a brown suitcase, which has yet to be recovered. The reason for her departure was allegedly after a disagreement with one of her family members. She possibly spent time in the city of Naples before arriving in Miami. Before the connection was made between her and the Jane Doe, investigators did announce that there was a possibility she had been murdered.

Elkins' was located in a small canal, face down, in Moore Haven, Florida, near the county line separating Glades and Hendry Counties. It was estimated that she died about a day before, but decomposition had already rendered her unrecognizable.

Some reported seeing the then-unidentified female at the Uncle Joe's Fish Camp or the Trucadero Bar in Clewiston, Florida around the time she was murdered. The remains were thought to belong to a woman between 25 and 45, until 2020.

In 2020, the sheriff's office became aware of the disappearance of Nikki Elkins, 16, who ran away from home nearly a month before the victim's body was found. Despite the weight difference, Elkins had a similar tattoo on one of her thumbs, although it is listed to have been on her right.

On September 29, 2020, it was announced via Samantha Steinberg's Facebook page that the identification was successful. The artist had provided an updated facial reconstruction in 2019, prior to the discovery that the victim was much younger than originally estimated. 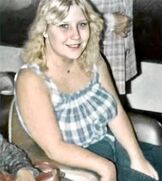 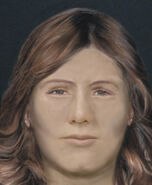 Original sketch
Add a photo to this gallery

Retrieved from "https://unidentified.wikia.org/wiki/Nicki_Elkins?oldid=155748"
Community content is available under CC-BY-SA unless otherwise noted.