Northamptonshire Jane Doe was a woman who was found deceased on the side of the M45 near Byfield, Northamptonshire, England in 2002. She died after ingesting several packages of cocaine pellets. It's thought she was a drug courier.

Officers believe she may have entered the UK at Birmingham Airport and had ties to the West Midlands. 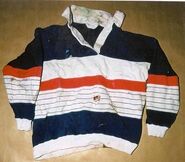 Retrieved from "https://unidentified.wikia.org/wiki/Northamptonshire_Jane_Doe?oldid=165183"
Community content is available under CC-BY-SA unless otherwise noted.