Philadelphia Jane Doe was a child discovered near a home in Pennsylvania.

A local resident found the girl's remains in brush. The remains had been there for some time, as only her skull and three other bones were found. The bones were determined to belong to those of a child.

In August 2018, police attempted to locate the remains for testing, yet the remains could not be located in the known cemetery of burial. 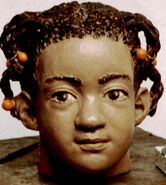 Retrieved from "https://unidentified.wikia.org/wiki/Philadelphia_Jane_Doe_(1984)?oldid=135487"
Community content is available under CC-BY-SA unless otherwise noted.