Raul Antonio Guerra was a United States Navy Sailor who went missing while a passenger on a Grumman Tracer Electronic Surveillance Aircraft (E-1B) near Tam Kỳ, Vietnam on October 8, 1967. His remains were found on July 9, 2004 and identified on February 20, 2019.

Raul Guerra was born on December 18, 1942 in Mexico to an Armenian mother and a Mexican father. At some point in his life, he and his mother moved to Montebello, California. He graduated from Montebello High School and enrolled in East Los Angeles College. Acquaintances would describe him as "dedicated, kind and down to earth and he had a great smile, boyish good looks and wide, happy eyes."

Guerra was most remembered by his writing talents and known to have spent his evenings in the school's main journalism classroom. Although Spanish was his first language, Guerra learned English fast and became the editor of the school magazine and worked for the now-defunct Montebello Newspaper. Some people have likened Guerra's writing career to well-known Latino journalists Frank del Olmo and Ruben Salazar. Guerra also got engaged to a woman named Mary Barrow-Somerlott who was also active in the school's journalism program.

On October 17, 1966, Guerra decided to enlist in the United States Navy. He knew he would likely be drafted anyway because of the Vietnam War and wanted to choose his service branch. He was ranked was Journalist 3rd Class and was assigned to the Early Warning Squadron 111, Detachment 34 on the USS Oriskany (CVA-34). At the time of his enlisting, Guerra speculated that he wouldn't return and sent letters and pictures to Mary back home.

The Defense POW/MIA Accounting Agency’s predecessor commands, the Joint POW/MIA Accounting Command (JPAC), the Joint Task Force- Full Accounting (JTF-FA,) and the Joint Casualty Resolution Center (JCRC,) interviewed numerous Vietnamese individuals over the years regarding the crash. Between 1993 and 2007, JTF-FA and JPAC teams investigated the incident on thirteen to fifteen times Joint Field Activities. It was reported that a Vietnamese farmer found some of the remains and buried them in the Hoi Mit village in Thua Thein-Hue Province.

Ruben Valencia, Guerra's best friend and fellow Vietnam veteran worked with the DPPA and the Department of the Navy. Valencia was home on leave in Southern California when he recived a call from Guerra's mother to come to her house after being notified by the United States Military that she should expect servicemen to come to her house regarding news of her son. Valenica further elaborated, "He had volunteered to go on this reconnaissance flight over Da Nang. He thought he could get a bird’s eye view."

On July 9, 2004, during the 79th JFA, a joint U.S./Socialist Republic of Vietnam team located the crash site, recovering aircraft wreckage, material evidence, and human remains. On August 15, 2005, the JPAC Central Identification Laboratory received possible human remains from the crash site. On June 12, 2007, the remains of Pineau, Roggow, Wolfe, Zissu were identified. Because of the lack of relavent family DNA samples, Guerra's remains were not identified.

Using dental and isotopic analysis and circumstantial and material evidence, DPPA scientists were able to identify the remains of Raul Guerra on February 20, 2019. The identification was announced on February 25, 2019.

Guerra was buried at Rose Hills Memorial Park in Whittier, California on April 25, 2019, which Valencia can see from his backyard. Another Vietnam veteran, touched by Valencia's search, purchased the grave site at the cemetery. 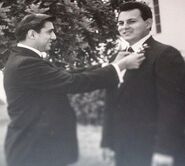 Retrieved from "https://unidentified.wikia.org/wiki/Raul_Guerra?oldid=138626"
Community content is available under CC-BY-SA unless otherwise noted.