Unidentified Wiki
Register
Don't have an account?
Sign In
Advertisement
in: Female, Homicide by gunshot, Doe Network solves,
and 11 more

Sandra Ann "Sandy" Stiver was a teenage girl who went missing alongside her sister-in-law, Martha Stiver in 1968, her body was found later that year but was not identified until 2014.

Sandra's body was found in 1968 in a deep stage of decomposition. She was shot a total of 6 times, 5 in the chest and abdomen, one in the left temple. She was thought to be as old as 30. Her sister came across their cases on the Doe Network believing that the unidentified girls may be the pair. The bodies were exhumed in 2014 and they were identified via DNA. 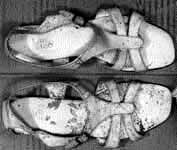