Unidentified Wiki
Register
Don't have an account?
Sign In
Advertisement
in: Male, Black, People found in Maryland,
and 10 more

Silver Spring John Doe was a male who fell to his death from the top level of a parking garage in Silver Spring, Maryland on January 15, 2019. He was identified weeks later in February 2019. His identity has not been released. 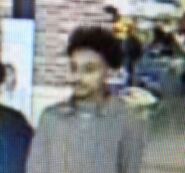 CCTV image of the descendant leaving the Walmart in Washington, D.C on December 19th, 2018.
Community content is available under CC-BY-SA unless otherwise noted.
Advertisement