Six Shooter Jim is the nickname of a man who was killed in 1885 in Tombstone, Arizona by future lawman and outlaw Burt Alvord. Although the circumstances between Six Shooter Jim and Alvord, an eighteen-year-old Tombstone resident at the time, is unknown, the latter was already known to have a reputation of frequenting saloons and participating in several bar altercations. This suggests Six Shooter Jim may have been killed in one of these altercations. He is buried in Row 7, Lot 23 of Boothill Cemetery. 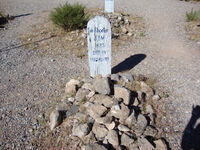 Retrieved from "https://unidentified.wikia.org/wiki/Six_Shooter_Jim?oldid=131596"
Community content is available under CC-BY-SA unless otherwise noted.