Spokane John Doe was a man found deceased in the Spokane river in 2007. He had a previous injury to his face, which would have left noticeable defects. 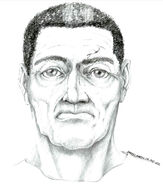 Retrieved from "https://unidentified.wikia.org/wiki/Spokane_John_Doe_(2007)?oldid=128527"
Community content is available under CC-BY-SA unless otherwise noted.