Suesan Marline Knorr was a teenager killed by her mother, Theresa, in 1984 after undergoing years of severe abuse. Suesan's sister, Sheila Sanders, was killed in 1985.

Suesan, who told her mother her plan to move away was granted permission to leave, only if she would allow her mother to remove a bullet lodged in her back to prevent it from being used as evidence if Suesan would ever report the abuse in the future. The bullet in question was the result of Theresa shooting her two years before.

After Suesan was unconscious from a dose of medicine mixed with whiskey, the bullet was cut from the victim's back and disposed of. Suesan later developed sepsis and was delirious in the days following the operation. Theresa forced Sheila and her two brothers to drive to Squaw Valley, California where Suesan was then burned alive, bound with duct tape.

Both sisters remained unidentified until 1993 when their youngest sister contacted America's Most Wanted after authorities failed to believe her accounts of both murders. Neither body was forensically identified, but the circumstances surrounding their deaths as well as items found at both scenes corroborated their surviving sister's and one brothers' accounts.

It was known that Suesan required the use of diapers in the days preceding her death, according to her living sister. Diapers were discovered at the crime scene, which was described by her brother. The wound on Susan's back was noted by the coroner and was consistent with her sister's account of her death. 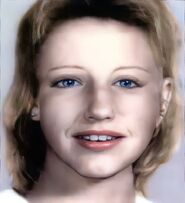 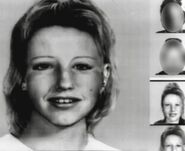 Retrieved from "https://unidentified.wikia.org/wiki/Suesan_Knorr?oldid=138355"
Community content is available under CC-BY-SA unless otherwise noted.