Tammy A. Vincent was a teenage girl who ran away from home in 1979 and was subsequently murdered in California. She was identified in 2007.

Vincent ran away from home in Washington State. Before she was identified, it was theorized she was a victim of serial killer Gary Ridgway, who preyed on runaways and prostitutes in the area.

In the weeks preceding her death, Vincent called a relative from California and was fearful about her future. She was scheduled to testify against a man involved in human trafficking. She may have been involved in prostitution at the time she was killed.

Vincent's burned body was discovered in Tiburon, California in September 1979. She had been stabbed to death with an ice pick and her body was doused in acetone. Witnesses saw a female matching her description accompanied by a man who purchased products similar to those used in the murder.

The remains were unrecognizable; her hair color and style could not be estimated. DNA was later obtained from body hair samples. In 2007, she was identified; her cremated remains were flown to her family by one of the case investigators. 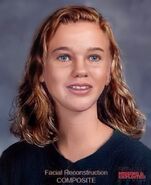 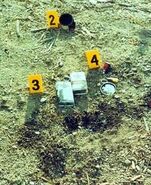 Retrieved from "https://unidentified.wikia.org/wiki/Tammy_Vincent?oldid=138385"
Community content is available under CC-BY-SA unless otherwise noted.